There are times your photos are very nice and just what you want, but then again at times there just seems to be something that gets in the way of making a photo a great photo preventing it from being aimed directly into the trash can.

You know what you seen in your view finder would be great, but after it is all over you find that same photo a ugly mess and think, that was a waste. You are well on your way out of the area and maybe will never to go back. There is also times when it just can’t be helped, things do get in the way or are just there. You either take the picture or not, so you take it and explain to others about the thing in the photo that should not be there.

Enter: The Cloning Tool. What amazing things you can achieve with this tool, but I can’t do that you say, hog wash, if I can learn you can learn. Yes, you will need to be patient and learn, but if you give it a try as well as time you will arrive.

My first attempt at cloning was a sad story, but yet true. We knew a couple very well whose son killed his girl friend. He was a very nice young man, but he lost it because she wanted to break off.
The boy’s parents liked the girl very much and were sad over the incident. Their son was now going off to prison, They had no pictures of him except a photo of him and his girl friend during their graduation.
The mother knew I was into photography and asked if I could do something with the photo.
I knew about cloning, but never tried, to help her I took the challenge.
I had to take the girl out of the picture. They were standing next to each other with their high school as the background. It was very tedious work, I had to replace parts of the girl with parts of the school, grass, and trees. NOT EASY for a beginner, but I did it, when it was finished you never knew there was more then one person in the photo.
SO, if I can learn you can also, go for the finish line and give it a try, you will be amazed.

The photo here is that of a Eagle statue. I knew if I got low to the ground I could make the eagle look like it was in the air, getting low got the buildings out of the way. At the bottom you can see part of the main support that holds the statue, it is made to look like a tree branch.

I thought if I could clone the branch out the eagle will appear to be in flight. The eagle looks so real at first glance I thought for sure a photo like that would appear to make it look very real.
Did  it fool people ?
It took my son Scott by surprise when he first seen it, he got fooled until he view the colors I am sure.

Amazing, simply amazing what you can do with some time and a good program.
There was a lot of work involved with getting the feathers to replace the support, but clone, clone, clone and there you are. I find no need to purchase a $600 plus photo program such as Photoshop CS3 or 4.
I personally use Adobe Photoshop Elements 8 which has many things from the pro package and will do whatever most people in our caliber would ever need.
So, Go for it, give it a try. If you mess up, big deal. Like riding a bike when you were a kid, get up and go again, Go for the Gusto. 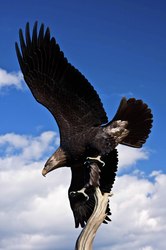 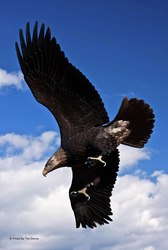